The Province of Asti lies at the heart of Piedmont and borders Liguria in the south.
This mostly hilly territory stretches across Monferrato and a small area of the Langhe and the Langa Astigiana, and is traversed by the Tanaro River.
Gentle hills alternate with valleys to create landscapes of unique beauty, and vineyards stretch as far as the eye can see, to provide a kaleidoscope of shades and tones.

The Asti area is a wine producer par excellence and the home of Asti Spumante DOCG (sparkling wine), renowned and exported all around the world. While the hills offer wonderful landscapes, the various reserves have their own beauty, such as the Rocchetta Tanaro Natural Park, the Special Natural Reserve of the Andona, Botto and Grande Valleys, and the unique WWF Oasis of Forteto della Luja, which includes a beautiful stretch of the Langa, lying on the banks of the Luja stream.

Within this stunning natural scenery lie towns of Medieval origins, such as Canelli, Nizza Monferrato and San Damiano d’Asti, or small but evocative Medieval borgoes in the hills, like Moncalvo, Roccaverano and Costigliole.
Along the ancient Via Francigena, it is still possible to see wonderful Medieval parish churches and abbeys, while the monuments of Asti’s historic center testify to the golden age of the Asti when it was a free comune(11th to 14th Centuries).
Folkloric events, the local cuisine based on traditional recipes and the local produce never fail to delight visitors. 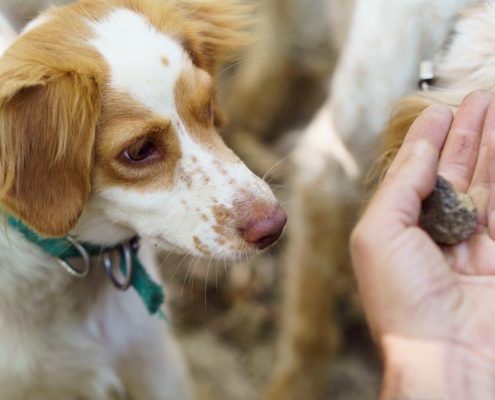 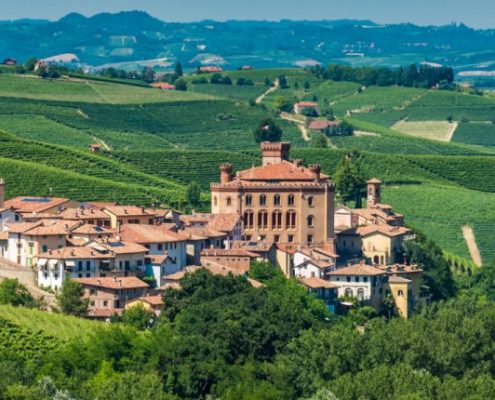 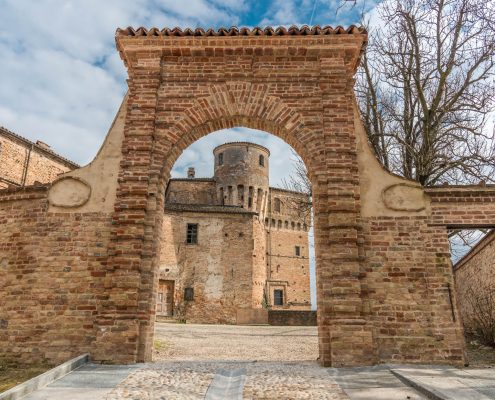 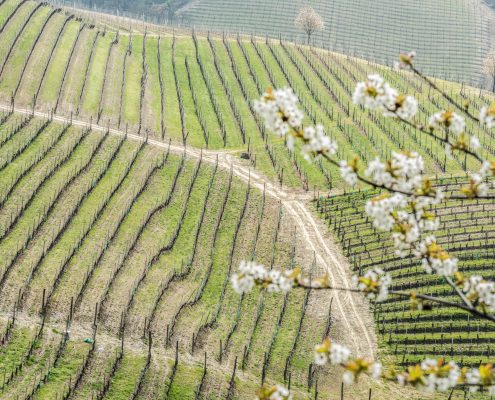 The Asti area is rich in history, tradition and works of art, and should be thoroughly explored.
The first stage of any tour must be Asti, one of the most important cities of art in Piedmont and birthplace of Vittorio Alfieri, the famous 18th century poet and dramatist. The old town is picturesque and charming, opening onto the triangular shaped Piazza Alfieri, where the town’s famous Palio (horse race) is staged.
Among the architectural landmarks are noble palaces, towers and ancient churches, and the magnificent Gothic Cathedral.

The northern part of the territory offers a fascinating route retracing the ancient Via Fracigena to discover quaint towns, such as Cortazzone with its Romanesque church, Montechiaro with the Santi Nazario e Celso church, Passerano Marmorito with its castle and Cocconato. The Medieval churches surrounded by the countryside of Asti are enchanting, such as the Church of San Lorenzo in Montiglio and the Abbey of Santa Maria di Vezzolano in Albugnano, one of the best examples of the Romanesque style in Piedmont.
All over the territory there are imposing castles, ancient dwellings of local nobles, such as the Castigliole d’Asti castle, which every year hosts the “asta del barbera” (Barbera wine auction). Of particular interest is also the majestic Gancia Castle – visits inside are not allowed – overlooking Canelli, which is famous for the production of Asti Spumante.

In this land, turned over to viniculture, the museums of rural life are worth visiting, such as the Museum of Ancient Trades in the splendid Castle of Cisterna d’Asti and the “Museo Bersano delle Contadinerie e delle Stampe Antiche” (a museum of old peasant ways and antique prints relevant to wine history) in Nizza Monferrato.
An important religious center is Castelnuovo Don Dosco, where the Colle don Bosco is located, the birthplace of Saint Giovanni Bosco; the sanctuary dedicated to him draws pilgrims from all over the world. 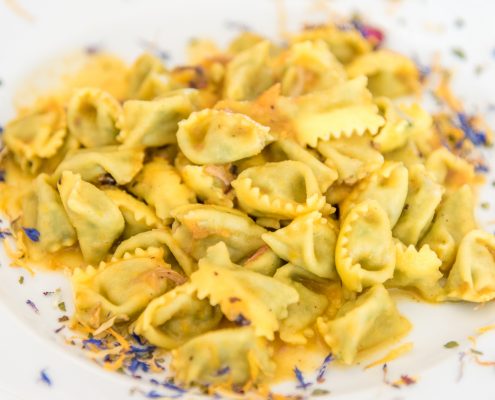 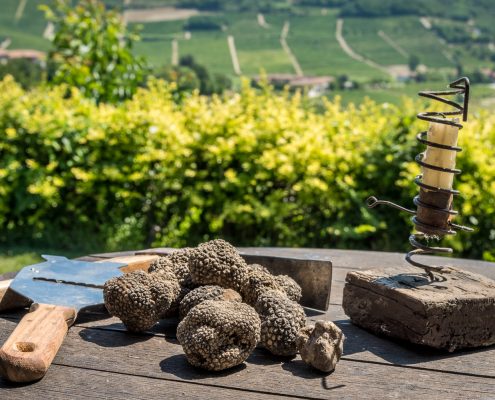 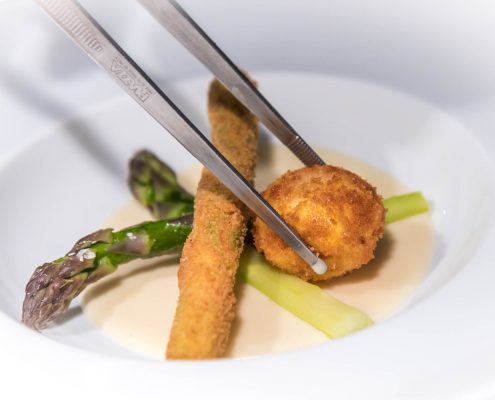 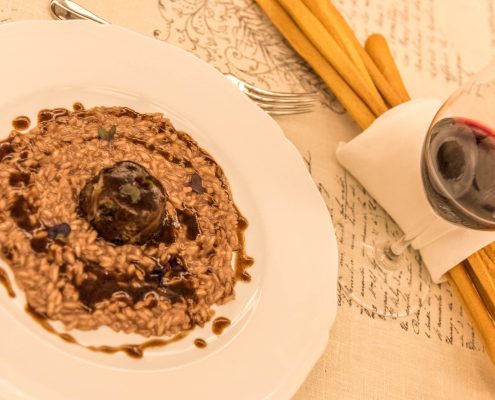 The most important product of Asti Province is the truffle, a real delicacy that can make even the simplest dishes special.
Among local vegetables, the cardo gobbo (the thistle of the artichoke) of Nizza Monferrato and the “square pepper” of Asti stand out, and both are regarded as essential ingredients for bagna caoda (a garlic and anchovy dip).
The area around Asti is renowned for its cheeses, such as robiola of Roccaverano and robiola di Cocconato.
The typical dishes of the territory are agnolotti, Monferrato-style potato gnocchi, ciotola di trifulau (cheese fondue with polenta and a sprinkling of truffles), Piedmont-style boiled meats, and, of course, bagna caoda.

The local desserts include amaretti (amond cookies) from Mombaruzzo, canestrelli, the finocchini of Refrancore and hazelnut cakes.
This area is world famous for its high-quality wines: from white wines to dry sparkling wines such as Cortese, Piemonte Chardonnay, Moscato d’Asti and, of course, Asti Spumante DOCG.
Among the prestigious red wines are the Barbera d’Asti, Barbera del Monferrato, Dolcetto d’Asti, Brachetto d’Acqui and Piemonte Brachetto, while the local grappas and other spirits are none too shabby. 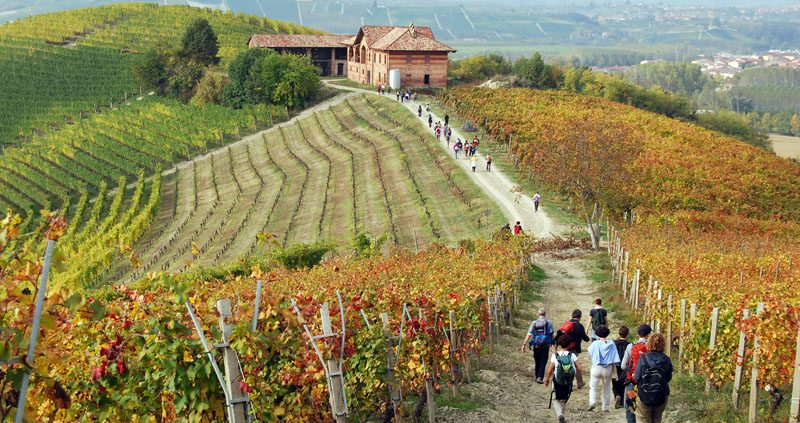